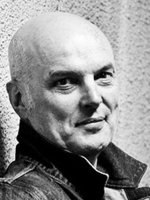 Robert Wilson was born in England, the son of an RAF pilot who served in World War II. He worked in shipbroking and advertising companies in London, and in commercial companies in West Africa, where he has lived. He has also lived in Greece. After marrying his wife, he travelled around Africa with her. They moved to Portugal in the 1990s. Robert Wilson currently lives on a farm in Portugal, dividing, however, his time between this country, Spain, and England.

With his first published work released in 1995, Wilson is an author of crime fiction, mostly serialised. Indeed, Wilson created a series of four novels (between 1995 and 1998) featuring the character Bruce Medway, and another, to date also comprising four novels (between 2003 and 2009), featuring the character José Falcón. This is not, however, the case of A Small Death in Lisbon (translated into Portuguese as Último Acto em Lisboa), published in 1999 and recipient of the Crime Writers Association’s Gold Dagger Award and of the Deutscher Krimi Preis (2003; International 1 category).

Among Wilson’s work stand out 2003’s The Blind Man of Seville (nominated for the Gold Dagger Award that year) and 2004’s The Silent of the Damned (The Vanished Hands, in the USA), winner of the 2006 Gumshoe Award for best European crime novel.

A Small Death in Lisbon is split into two different narratives: one taking place across a few weeks in 1999, in Lisbon; the other starting in Berlin in 1941. The latter gradually approaches the former (which is narrated in the first person by inspector Zé Coelho) until the connection between the two is made clear, as well as how the historical events depicted led to the crime investigated in 1999.

Klaus Felsen, a German entrepreneur, is recruited by the SS for his business acumen, with the goal of buying as much tungsten as possible from Portugal. He meets Joaquim Abrantes, with whom he opens a bank, Oceano e Rocha, financed by the Nazi gold made available to him for his payments. After the war, Abrantes finds out that one of his sons, Miguel, is actually Klaus’ son and he frames him in a murder, resulting in his imprisonment for 20 years. Later, in the 1980s, Miguel has a liaison (which results in the birth of a child) with the woman who would become the wife of the then lawyer of Oceano e Rocha. The child, named Catarina and born after the wedding, is murdered fifteen years later: this is the crime investigated in 1999. We discover that Catarina is used as bait by her non-biological father to incriminate, in turn, Miguel Abrantes, removing him from the equation and allowing bank funds to be used to pay the reparations to Jews that Americans demanded.

There are constant confrontations with the past, not only as a result of the narrative technique of intertwining two stories, but also because there are unrevealed matters concerning most characters, which are later discovered: one such example is António and his connection to Medinas.

Time is also very relevant for character development.  We have, on the one hand, Felsen, Joaquim Abrantes and his two sons, always operating in a world of vice (be it women, drinking or gambling) they never leave; on the other, we have the Inspector and Carlos Pinto, “good [people], real [people]. […] [s]omeone you can trust” (1999: 350), who give us the feeling they will never die “a man with no prospects” (1999: 429). This contrast is reinforced by our following of the former’s life stories throughout the book, whereas the Inspector and Carlos are only seen for a short period in 1999, which positions them, to a certain extent, above time and the decay it can bring on.

The different understandings that the Inspector and his assistant Carlos Pinto have regarding the Carnation Revolution, due to their generational differences, are also relevant: while the Inspector went through it and still struggles to see certain facts objectively (for instance, his father’s behaviour), Carlos assesses the situation from the outside, because, after all, “History’s only a weight to those that lived it. For the next generation it’s no heavier than a few school books and forgotten with a glass of beer and the latest CD” (idem, 8-9).

In what pertains the spaces in the 1940s narrative, almost all of them are depicted as socially upper class; on the other hand, in the 1999 section, except for the lawyer and his circle, the case is almost the opposite. Wilson stated in an interview: “What comes to me first is the setting. I have to have a feeling for place in order for the characters to walk out of their houses. I don’t necessarily have to know a place as if I’ve lived there all my life; what I do need to have is a strong emotional connection to that place”. It thus seems that the characters from each era emerge naturally from their respective environments. Wilson also notes that “A Small Death in Lisbon was a more complicated affair and required a detailed plan, not only to sell the idea but also to work from. This detailed plan was however a long way from the finished book. I did a lot of research but that was mainly because there was very little written about the period – 1940s Portugal. Censorship was then government policy and locals were not in the habit of keeping diaries. I worked hard to find interesting nuggets of fact but I worked even harder to make them into stories. Of the research I did, I barely used ten percent, the rest was imagination”. With this in mind, it could be said that the spaces Wilson depicts in A Small Death in Lisbon arise much more from a “strong emotional connection,” which arouses the author’s imagination, than from real facts.

We all went out to eat that night, even Senhor Rodrigues who might not have been used to the metal tables and chairs but appreciated the food. It was the meal my stomach had growled over for six months. Ameijoas à Bulhão Pato, clams in white wine, garlic and fresh coriander, robalo grelhado, grilled sea bass caught off the cliffs at Cabo da Roca that morning, borrego assado, Alentejo lamb cooked until it’s falling apart. Red wine from Borba. Coffee as strong as a mulatto’s kiss. And to finish aguardente amarela, the yellow fiery one. (1999: 9)

There were big fans of Cascais but I wasn’t one of them. It used to be a small fishing village with houses falling down steep cataracts of cobbled streets to the harbour and port. Now it was a townplanner’s nightmare, unless you were one of the townplanners who’d passed the numerous development projects in which case you’d be living in a dream elsewhere. It was a tourist town with an indigenous population of women who dressed to shop, and men who shouldn’t be allowed out of a nightclub. Real life had been stripped out and replaced with na international cosmopolitanism which appealed to a lot of people who had money, and about as many again who wanted to ease it away from them. (1999: 59)

He’d been with the PIDE for two and a half years and hadn’t regretted a moment. He’d spent his first year in the PIDE headquarters in Rua António Maria Cardoso in the Chiado district of Lisbon, where he’d demonstrated to his superiors a natural talent for the work. They didn’t even have to tell him how to recruit informers. He knew. He found out people’s weaknesses, he implied PIDE interest in their activities, and then saved them from arrest and the dreaded Caxias prison by bringing them into his network. (…) . If he smiled people liked him. The smiling made his long-lashed, blue-green eyes shine, which attracted their attention, while his moustache made him appear genial, and his thinning hair gave him an air of vulnerability so that, overall, people trusted him. He never made the mistake of despising people for this because he was so glad to be liked. He just made sure that his superiors knew that this carefully crafted exterior concealed a ruthless persistence, an unflinching severity, and an unswerving relish for following through. (1999: 294)

‘…four dead and three wounded. That’s what they said down in the Urgência, only four. They can’t believe it. I can’t believe it. There are tanks in the Terreiro do Paço and the Largo do Carmo but they’re not doing anything. They’re just there. The soldiers have rounded up the PIDE agents but not to punish them … you know … just for their own protection. The soldiers. I haven’t seen it … but they say the soldiers have put red carnations down their rifles so that the people will know, you see … they’ll know that they’re not there to shoot anyone. They’re there to liberate them. Only four people dead on a night like this with tanks in the streets and battleships in the Tagus. Don’t you think that’s just incredible, Senhor Doutor? I think that’s incredible. You know, Senhor Doutor, I never thought I’d be able to say this in my lifetime but I’m proud. I’m proud to be Portuguese.’ (idem, 321-22)