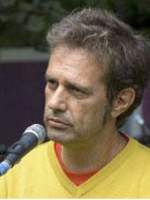 Adolfo Luxúria Canibal, pseudonym of Adolfo Morais de Macedo, is a transformer of perspectives from Luanda, Angola. “I create characters, that’s true. But that doesn’t mean one is Canibal and the other is Macedo. Those are not the ones I create – they’re others” (cf. Silva: 2009). He grew up between Vieira do Minho and Braga and in 1978 enrolled in Law School in Lisbon, where he lived until 1999, practising Law and legal consultancy. As a specialist in Environmental Law, Macedo gave countless lectures in Portugal and abroad. As a musician, writer and performer, his national and international travelling is remarkable. He has always been a staunch supporter of nature reserves with clear ontological boundaries in both ecological and ethological terms.

In 2003, the weekly newspaper Expresso considered him one of the fifty most important figures of Portuguese contemporary culture. From 1993 to 1999 he was part of a Group of Legal Experts of the Berne Convention for the Council of Europe, in Strasbourg. He then moved to Paris, where he worked as a translator, film extra, commercial manager, journalist, columnist, mobile phone voice, music critic and liquidation manager for film companies. At the end of 2004 he returned to Braga and to Law consultancy.

His movement between music, writing and the performing arts is a recurring characteristic of the founder, lyricist and lead singer of the band Mão Morta (since 1984), a role he had already carried out as part of the bands Bang Bang (1981), Auaufeiomau (1981-1984) and PVT Industrial (1984). In 2000, he joined the French band Mécanosphère, as a singer. He acted in the films Gel Fatal, by António Ferreira, and O Dragão de Fumo, by José Carlos de Oliveira. He is also the author of spoken word shows, both solo (1999) and with António Rafael (since 2004). Between 2000 and 2004, he collaborated with the Portuguese magazine Blitz  and has published articles in various newspapers and magazines, such as Vértice and 365. Since 1999, he has written an opinion column in the weekly newspaper O Independente; from 2001 to 2004, he hosted a weekly radio show on Antena 3. Macedo authored the books Rock & Roll (1984) and Estilhaços (2004) and wrote the preface for the Portuguese edition of The Songs of Maldoror (2004) by Isidore Ducasse (Comte de Lautréamont). He translated Heiner Müller (1997) and Vladimir Mayakovsky (2008). He staged and acted in multimedia performances and shows like Rococó, Faz o Galo (1983), Dos Gatos Brancos que Jazem Mortos na Berma do Caminho de Ferro (1983), Labiu e a Pulga Amestrada (1984) and Müller no Hotel Hessischer Hof (1997), with Mariana Otero, or merely acted, as he did in Maldoror (2007), staged by António Durães. He has contributed, as a lead singer or lyricist, to several albums and concerts by more than ten Portuguese and foreign bands and artists, such as Pop Dell’Arte, Clã, Moonspell, WrayGunn, Houdini Blues, Pat Kay & The Gajos and Steve McKay.

The poems, stories and essays on Estilhaços, partially written in Paris, record the physical and geomental travels undertaken by Adolfo Luxúria Canibal, which began at the end of the 1980s. Some of the book’s defining sections — “No Princípio era o Verbo”, “Depois veio o Som”, “Chegaram os Mão Morta”, “Mutantes S.21”, “Há já muito Tempo que nesta Latrina o ar se tornou irrespirável”, “E tudo ao Verbo retorna”, “Epístolas de Guerra” and “Francesices” — reveal the author’s intermedial and international journey. This author’s reality determines his perception of the “affectivity of language” and has led him to state: “the fact that I use Portuguese doesn’t make me particularly well understood by my contemporaries” (Canibal, 2004: 167). In “Sobre a Palavra,” he demonstrates that his conception of the expressive territory creates another order: “looking upon divergences and convergences, my point of view intends to be an external, transversal look, which crosses the theme like one crosses China – a smile on the lips, the senses alert and the indescribable pleasure of amazement at each curve of reason” (Ibid.: 163).

“Mutantes S.21,” for instance, is a journal of a trip through nine cities — Lisbon, Istanbul, Berlin, Amsterdam, Barcelona, Paris, Marrakesh and Budapest — in which, once again, the influence of the Situationist International (of which Guy Debord and Raoul Vaneigem were leading figures) is clearly visible, creating a kind of supra-world based on premises which privilege the regaining of time, the good use of its passing, the consciousness of its quick flight, the certainty of urgency and the feeling of the utmost availability. These topics, which crop up in “Há já muito Tempo que nesta Latrina o ar se tornou irrespirável,” are symptomatic of the utopia of unitary urbanism or of practices like drift and psycho-geography, and persist in this author.

It is pleasant to return to Paris, to the autumn wind which scatters the carmine leaves during nightfall. To once again hear the Arabic chatter, those cavernous sounds blown from the palate, and feel the cosmopolitan frenzy of hundreds of races and cultures rustling in the dusk, sharing the universal desire of reaching a home’s warmth. The world, in its variety, seems so close, just in hand’s reach, […] I love this silence, made up of a thousand indiscernible noises, in a blend which restores in me the peaceful serenity of emptiness […].

I Know Nothing Of Stars

The swinging beauty
Made of tough, African meats
Vibrating
With the sway of her steps

I know nothing of stars
Except, perhaps, the deep
Vastness
Of this gaze.