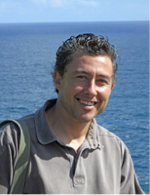 Born in Figueira da Foz in the late 1960s, Gonçalo Cadilhe experienced displacement early in his life, as a scout. His passion for travelling and surfing in his teenage years became a decisive factor in his life project, in which a sedentary lifestyle is seen with indifference and disenchantment, favouring frenzy and adventure. In this context, his condition as a traveller and wanderer is anchored in his contact with Marguerite Yourcenar’s Memoirs of Hadrian, a novel which propelled him, at age twenty, to travel to Rome to be able to read its final chapters at the Villa Adriana. In his own words, this novel proves itself a defining book for his travelling life path, in the sense that he could possibly find in it the root causes of his attraction to the literary component of any travel experience. For this reason, his degree in Business Management and the frivolous and dazzled stability of a permanent position with a strict schedule were of no use to him. Indeed, his fascination with reading and travelling prevailed and is visible in the weekly column he wrote and sent to Expresso’s Única magazine and to Grande Reportagem during his trip around the world, mentioning a literary work in almost every text, in keeping with the geography he traverses and describes.

In his journeys, the roles of columnist-writer-traveller-journalist converge, in a porous, fluid register that is so characteristic of travel writing. Consider the author’s words: “O que me preocupava era escrever bem, semana após semana. Captar o leitor, conquistar o espaço do Expresso, dar uma dimensão literária à minha volta ao mundo. O objectivo final, para mim, não era terminar a viagem – era editá-la em livro. Só agora chego, por fim a casa” [“What concerned me was to write well, week after week. To capture the reader, conquer the space of Expresso, give a literary dimension to my world tour. The final goal, for me, wasn’t to finish the trip – it was to edit it into a book. Only now do I finally get home”] (Cadilhe, 2007:9). This dimension Cadilhe speaks of can be understood as a practice of writing on the travelling undertaken by an inserted authorial subject within a multicultural and multidisciplinary context which embodies the condition of the homo viator contaminated with an aesthetic and ontological purpose. The writer thus consubstantiates a travel writing shaped into  journalistic register, shared with a multifaceted audience that travels through his books, built from a “personal anthology chosen from among hundreds of reports” (Cadilhe, 2006: 12).

In this sense, the consolidation of the image of the writer also results from the quality of the authors and works he evokes. Thus, from the vast constellation of writers who make up his mental library, some figures stand out, cut out of a polymorphic and polyphonic panel, having helped him to better travel the world, and allowing for a deep inter- and transtextual dialogue. Marco d’ Eramo’s Il Maiale ed il Grataciello, read in the United States, Eduardo Galeano’s Las Venas Abertas de América Latina, in Bolivia, V.S. Naipaul’s Among the Believers, in Indonesia, Octavio Paz’s In Light of India and Alberto Moravia’s An Idea of India, in India, and Paul Kriwazeck’s In Search of Zarathustra, in Iran, stand out as some of the examples cited by the writer-traveller, revealing an autobiographical strand in the narrative body of the actual journey and the textual one.

Although there are countless different ways to travel, Cadilhe sees air travel as a last resort, privileging walking as the method of journeying par excellence, which, alongside with solitude, the baggage he carries, the accommodation he chooses and the encounters with the Other, allows for a better crossing of borders and a victory in the publishing space. Indeed, the Cadilhean travel experience is not limited to a mere journeying through human and geographical landscapes, but appears as a mirroring in which the Self and the Other look closely at one another, allowing other journeys and contributing to the creation of a poetics of genre shaped in a transnational context.

One of the books I’m reading, Il Grande Maré di Sabbia, talks about the desert. It was almost premonitory that I chose it as a travel companion because its author, Stefano Malatesta, describes the desert like one crosses the sea — with passion for the traverse but hastening to arrive. (Planisfério Pessoal, p. 23, translated)

The sun begins to descend on the horizon, the cattle returns to its sheds, and I already feel that Angola will be very consonant with me, very emotional. (África acima, p. 93, translated)

Magellan, impressed with the savage’s guanaco moccasins, which left huge footprints on the sand, called him «patagão» [«large paw»]. And so the last region before the end of the world — Patagonia — came to be named. (Nos Passos de Magalhães, p. 117, translated)

Why Genoa? I cannot answer very well. There are objective reasons, but then comes the «chemistry» between men and cities, and that is unexplainable. Genoa is my favourite. (Tournée, p. 163, translated)