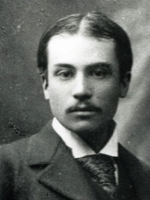 The literary activity of Valery Larbaud – not Valéry, as he himself specified (cited in Mousli 1998: 18) – began in his adolescence with several works, of which Les Portiques (1896), a small volume of verse, was one of the few surviving the author’s own purge. The prestige Poèmes par un Riche Amateur (1908), published under the name of A. O. Barnabooth, earned him would later be confirmed by other writings, such as the novel Fermina Márquez (1911), A. O. Barnabooth, Ses œuvres completes (1913), Enfantines (1918), Amants, heureux amants… (1923) and Aux couleurs de Rome (1938).

A tireless traveller, Valery Larbaud visited several countries in his youth, namely Italy, England, Russia, Spain, Austria and Germany, among others. In 1926, the author visited Portugal for the first time, a country previously mentioned in some of his poems. Portuguese literature was, indeed, not unknown to him, since he had read translations of Antero de Quental and Alexandre Herculano from an early age (Rivas 1985: 103, 104). Additionally, in his childhood, through reading the Journal des Voyages, Valery Larbaud was acquainted with the story of Portuguese colonial explorer Serpa Pinto and his achievements.

Having planned a sojourn of few months in Lisbon in June 1925, a project which seems to have been connected to his friendship with the writer Ramón Gómez de la Serna (Arcos 1974: 41), a Spanish writer who owned property in Estoril, the writer journeyed to Lisbon on the famous Sud Express, arriving in Lisbon on January 25th, 1926. At first temporarily staying at the Avenida Palace, the author subsequently moved to a boarding house on Avenida da Liberdade, 168.

After incognito visits to the city and its then outskirts, like Belém and Algés, Valery Larbaud gave a lecture on Maurice Scève and other forgotten French poets of the sixteenth century, organized by the União Intelectual Portuguesa, which took place at the S. Carlos Theatre on February 20th, to great success. On February 22nd, during a banquet held in his honor at the Bristol Club, the writer was honoured by several other writers, including António Sérgio, Ramón Gómez de la Serna, António Ferro, João de Castro Osório and even Almada Negreiros, who recited his poem in French Histoire du Portugal par cœur, written in Paris in 1919.

Having left Lisbon in order to better know the Portuguese countryside, Valery Larbaud was informed of the passing of his aunt, Jane des Étivaux, during his stay in Buçaco, forcing him to cut short his stay in the country. The writer departed for France on the 8th of March and never returned to Portugal.

Although Valery Larbaud’s sojourn in Portugal was short, his interest in Portuguese language and literature was great, so much so that he had started to learn Portuguese with great commitment while he was still in Portugal.

On the other hand, concerning his literary production, Valery Larbaud wrote three works which, although initially published in journals of which he was one of the directors, were first collected in the volume Caderno, published in 1927 with illustrations by Mily Possoz; in them was recorded the connection between Portugal and the work of Valery Larbaud.

The first of these texts, ‘Lettre de Lisbonne à un groupe d’amis,’ partially published on April 1st, 1926 in the Le Navire d’Argent literary review, is a record of the author’s impressions of the Portuguese capital, including a short description of the main events of his stay in the city, namely the conference about Maurice Scève and the banquet at the Bristol Club.

‘Divertissement philologique,’ published in the La Nouvelle Revue Française magazine on June 1st, 1926, focused on the discovery of the Portuguese language, which Valery Larbaud was then learning. This text was incidentally the only one of the Caderno texts to be translated. The translation, by writer Fernanda de Castro, with whom the author corresponded, was published in two parts in the newspaper A Informação, under the title ‘Recreação filológica,’ in June 1926.

Valery Larbaud’s third text, ‘Écrit dans une cabine du Sud-Express,’ published in the 1926 Spring issue of the literary review Commerce, reflects the French writer’s interest in Eça de Queirós. Throughout the text, the writer describes his 4-day-long reading, in Portuguese, of A Capital, published in 1925 by Eça de Queirós’ inheritors, following it with a summary and brief analysis of the book.

These texts were once again reprinted in Jaune Bleu Blanc (1927), a collection of Valery Larbaud’s texts, which included essays, travel notes and landscape impressions. It is in this volume that another of the author’s articles, which, although it is no longer focused on Portugal and its literature, briefly alludes to the Palácio Hotel at Buçaco, the place where it was allegedly written, can be found. It is ‘200 chambres, 200 salles de bains,’ first published in 1926 in La Revue de Paris.

The writer’s journey to Portugal, and his curiosity for the language and the country were, then, recorded. His interest in Portuguese literature further led Valery Larbaud to correspond with Portuguese writers such as António Sérgio, José Osório de Oliveira, António Ferro and Vitorino Nemésio. Undeniable evidence of his role as a mediator of Portuguese culture in France can be found in the preface Larbaud wrote for a new French translation, published in 1941, of Eça de Queirós’ A Relíquia, at the request of translator Georges Raeders. In it, as in previous texts, the author proves himself faithful to his unwavering interest in circulating and promoting in France the cultures and literatures that were ignored or barely known there.

One need only see a page printed in Portuguese to immediately feel the strong personality of this language. (translated from 1926a: 4)

There truly is, in the Portuguese language, something grandiose, Manueline. (translated from 1926b: 4)

Beira-mar is one of the most poetic expressions I know. I tis equivalent to the English seaside, but much more expressive. It is vast, grand, oceanic. (translated from ibidem)

Eça de Queirós is a classic in Portugal and Brazil, and his influence in Spain is already historic fact. (translated from 1927: 252)

I have still only read one of Eça de Queirós’ great works, Fradique Mendes, but I can infer what his oeuvre might be like: an admirably precise and complete tableau of Portuguese society in the final thirty years of the 19th century. He sees this society as a historian, a moralist, an artist and a poet, with the distancing necessary for an overview. (translated from idem, 261)

Portuguese joy is a legend; but Portuguese comity, the sweetness of Portuguese customs, are reality. Portugal is a country where one is happy, where I believe we could live pleasantly. It has the climate, the landscape, the Ocean on its side; and also the moral climate of an old and glorious European kingdom with vast colonies, an overseas empire.  (translated from 1927: 218-219)