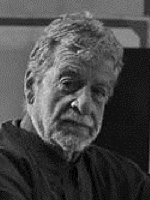 José Fernandes de Lemos – Fernando Lemos’ birth name – was born in Lisbon, where he studied lithography and painting at the António Arroio School of Decorative Arts, and later at the National Fine Arts Society. From a young age he was in contact with the Lisbon artistic and literary milieu, leading him to define himself as a “surrealista, pintando, desenhando, escrevendo poesia” [“surrealist painting, drawing, writing poetry”]. To these many skills, he would come to add his foray into photography “como um primitivo” [“as a primitive”], thanks to his attraction for the effects of the laboratory liquids on the fragmentation of images.

His artistic individuality was first, and decisively, affirmed for the public at the notorious and scandalous Casa Jalco exhibition, in 1952 (alongside Fernando Azevedo e Vespeira), at which the young Fernando Lemos exhibited over a hundred works (photography, oil paintings, drawings, and gouaches).

An opponent of the Salazar regime, Fernando Lemos moved to Brazil in 1953, settling down in São Paulo and gaining Brazilian citizenship in the early 1960s, when he started to collaborate with the Portugal Democrático newspaper, the voice of the political exiles in Brazil, where, in the words of Gilda Santos (1998), his work helped “levantar a qualidade artística, nem sempre brilhante, do jornal”  [“elevate the not always brilliant artistic quality of the newspaper”], which would be published until 1975.

As a Calouste Gulbenkian Foundation grant holder, he travelled to Japan in 1962, where he attented calligraphy courses in Tokyo and Kyoto. In the following year, another study trip through Hong Kong, Thailand, Egypt, Italy and France took place.

Unable to return to Portugal, his situation would change drastically after the Carnation Revolution, when he was even able to create exchange projects between Portugal and Brazil and showed work several times in Lisbon during the 1980s. The 2001 National Photography Award from the Portuguese Centre of Photography (Porto) is worthy of note among the official accolades recognising Fernando Lemos’ artistic quality.

His poetry debut took place in 1952 with Teclado Universal, published in the “Cadernos de Poesia”; he also collaborated with poetry and illustrations in Uni/Bi/Tri/Tetra/Pentacórnio, coordinated by José Augusto França and Jorge de Sena.  It is in fact the latter, a highly demanding poet and critic, who would later present, also from his Brazilian exile, an expanded reedition of Teclado Universal in 1963, using the following words: “É assim que Fernando Lemos, transcendendo as fronteiras pela sua arte plástica, se liberta do pequeno círculo verbal em que a maioria dos poetas portugueses, em Portugal, se empresta mutuamente, e a quem os acotovela na rua, por uma ilusão de humanidade. E é assim que em Teclado Universal e Outros Poemas, continua a ser tão português, da única maneira autêntica que tem havido de sê-lo: a raiva de pertencer-se a uma língua que tem servido para tudo, menos para libertar quem se serve dela” [“This is how Fernando Lemos, transcending the borders through his visual art, liberates himself from the small verbal circle within which most Portuguese poets, in Portugal, lend themselves mutually, and to those who elbow them in the streets, for an illusion of humanity. This is how Teclado Universal e Outros Poemas remains so Portuguese, in the only authentic way it has to be so: the rage of belonging to a language which has been used for everything except the liberation of those who use it”] (Sena 1985).

Later, in 1985, Fernando Lemos once again reedited the surrealistic Teclado Universal, this time within a larger volume, in which linguistic experimentalism comes to the fore, usually contaminated by concretist abstractionism, even when it comes to the self-declared “Poemas de circunstância” [“circumstance poems”]. This expanded book of poems, the culmination of many years of work, was named Cá & Lá [Here & There], a synthesis of his ambivalent condition as a citizen and artist, much like the summary E. M. de Melo e Castro (himself also divided between Portugal and Brazil…) put forth: “CÁ e LÁ. Reduzem-se as distâncias mas aumenta o alcance” [“HERE and THERE. The distances shorten but the reach heightens.”] (Melo e Castro 1985).

Additionally, as Graça Capinha (1997) so appropriately put, this multifarious creator is perfectly aware of the complexity of both his identity and his art, both constructed by multiple intersections and ambiguities. In the important catalogue À Sombra da Luz, Fernando Lemos himself wrote “(…) tenho duas pátrias, uma que me fez e outra que ajudo a fazer. Como se vê, sou mais um português à procura de coisa melhor” [“(…) I have two fatherlands, one that made me and one that I help make. As you can see, I’m yet another Portuguese man looking for something better”] (Lemos 1994).

His visual work has since been scattered around the world, with representation in museums and private collections in Brazil, Portugal, Spain, Switzerland, Poland, France, USA, Japan, Holland, and Argentina.

Us heroes of the sea here are
noble people always the carracks
ahead of the kings.
First the frame then
the painting after the account
the epic after the account
(…)
Raise once again today
All the splendour of Portugal
chicken after the egg since
first Columbus then Cabral