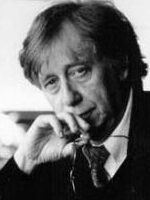 Louis Gauthier was born in Montreal, where he earned his bachelor’s degree in Philosophy. Initially, he worked as a copywriter, but soon began to concurrently dedicate himself to translation. He published his first novel, Anna, in 1966.

Despite having published a few more novels in the meantime, it was his “travel trilogy” that brought him greater recognition. In this trilogy, made up of Voyage en Irlande avec un parapluie (1984), Le pont de Londres (1988), and Voyage au Portugal avec un Allemand (2002), Gauthier describes the route of the trip to India he planned to undertake. The three volumes were collected as a single publication in 2005, titled Voyage en Inde avec un grand detour.

The book begins with the narrator on board a train, in France, travelling towards the Spanish border through Bayonne. While the train crosses Spain, we are faced, for the first time, with the narrator’s anguish – one that is “toujours là, elle dormait au fond de moi” [“always there, sleeping within my depths”] (Voyage au Portugal avec un Allemand, p. 53), and to which he returns frequently in the book. Soon after arriving in Lisbon, the narrator meets Frantz, a German currently residing in Portugal who speaks French and Portuguese. Throughout the narrative, Angèle – the narrator’s former lover or companion – is omnipresent, and, at times, one feels as if the journey was only undertaken due to the desire to escape something related to her. Later, after both men have wandered around the city, Frantz leaves for Beja; by chance, when the textual author begins his trip to Lagos, they both meet again (Frantz is there in search of employment), before the narrator’s departure to Tangiers, via Málaga and Torremolinos.

The book oscillates between the anguish of the many moments in which the narrator seems to question his travelling and the belief that something awaits him at his destination, something which would give him some sort of internal change. However, one is mostly left with the feeling that perhaps the textual author himself is no longer certain this change is possible.

Occasionally in the narrative there are scenes of wandering in which the journey seems interior than exterior. On the streets of Lisbon, this wandering becomes a trip through the memories of Angèle – and we could say Gauthier’s travelling becomes more introspective when it comes to memory.

Indeed, in what concerns the actual “journey with a German”, it is merely, according to the narrator, a casual encounter of two separate fates, with no possibility for a conscious junction: “je n’ai jamais considéré que nous voyagions ensemble. Simplement, que nos itinéraires coïncidaient” [“I never considered that we were traveling together. Simply, our itineraries coincided”] (idem, p. 169)

In this context, the image of Portugal the narrator puts forth is marked by transience: only the outlines are defined, little of the inner is explored; it is an image marked, also, by the feeling that there is an escape to somewhere – even if to an undefined place, and even if one does not know whether, once arrived there, brevity will make way for permanence.

I don’t know where I’m going, I am not useful to anyone. I don’t have any obligations, no one is waiting for me anywhere and I could very well stay there all day long, it would not change anything. It would just be more painful. (Voyage au Portugal avec un Allemand, p. 20) (translated)

Write what then? The landscape no longer has any importance, the exterior world no longer has any importance, I am only concerned with the careful observation of the crater that is opening in me, the sight of which hypnotizes me. Dizzy at the edge of myself, I observe without understanding this great hole that is nothing, not even a hole, simply the absence of me, the absence of me with nothing else in its stead. (idem, p. 49) (translated)

After, he asks me what I’m doing in Lisbon. I tell my story speedily: I’m a writer, I’ve just arrived from Ireland, I’m heading towards India, I didn’t want to take a plane so as to truly feel the distance separating the West from the East. He doesn’t look too surprised. ‘Ah well,’ he said, ‘I too am on a kind of pilgrimage.’ (idem, p. 65) (translated)

Portuguese men are described as grave, taciturn, proud, marked by a tough life, but welcoming, simple, and eager. Nothing is said of Portuguese women. (idem, p. 74) (translated)

I stay in bed, daydreaming, thinking, retreading my old memories. I would have loved to be outside, in the outer world, to have a clear project, precise objectives, an aim. But I am a writer, a writer who doesn’t write. Perhaps not even a writer, perhaps a pilgrim, a poor sinner headed towards an unidentified pilgrimage site, a pilgrim without religion, headed towards himself, knowing however he is still there. What to think of such a journey? That is the question I ask myself each morning. (idem, p. 107) (translated)

Yes, it is truly a pilgrimage I am on: I do not stop marching, suffering, hoping. I carry my bag on my shoulders like a cross. I continue to put obstacles in my own path so that my life may resemble more and more that of a martyr. I should have put pebbles in my shoes. (idem, p. 145) (translated)