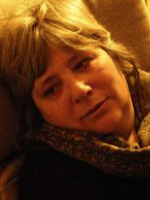 Ana Luísa Amaral was born in 1956 where 90% of people from Lisbon were born, at the Alfredo da Costa Maternity Hospital. At the age of nine, she moved, for reasons beyond her control, from Sintra to the North (Leça da Palmeira), having suffered first-hand the foolishness of the North/South divide. She attended the Faculty of Arts of the University of Porto, graduating in Germanic Languages. She must have liked the Faculty so much that she ended up staying, as a professor, until the present. As a career necessity, she had to complete a doctorate, which she did: on Emily Dickinson, whose poems were as fascinating to her as Zorro had been. Over the years, she published books of poetry.

Thus begins one of Ana Luísa Amaral’s autobiographical notes, written in 1998, and still reprinted today. If it were updated, now that over ten years have passed, this note might refer, in the same unconstrained tone, the publication of ten books of poetry, two children’s books, the translation of hundreds of poems into several languages, her poetry awards (2007: Casino da Póvoa/Correntes d’Escrita and Giuseppe Acerbi; 2008: APE Grande Prémio), the migrations from poetry into other artistic fields (opera, theatre, song) and her presence in countless international poetry gatherings. Any biographer of the author would certainly emphasize her active exercising of citizenship and her innovative approaches to the scientific/educational field.

The poetry of Ana Luísa Amaral is full of references and allusions to journeys and spaces, without depending on a “factual” journey, as is the case in Imagens (2000), with its “barcos, mares e viagens intermináveis, Jonas e Ulisses de mãos dadas” [“endless boats, seas and journeys, Jonah and Ulysses holding hands] (Santos, 1999:13). The journey is, in turn, that which is confirmed in the entirety of her poetry, starting in her debut book, Minha senhora de quê, as in the poem “Viagens e Paisagens” – “Tremente carruagem na velocidade / atónita do tempo (que o momento já / tarda e o conforto afinal só ilusão)” [“Trembling carriage in the speed / astounded with time (because the hour is / late and comfort mere illusion”] – and that which condenses into unusual kinetic images — “O tempo passeando nas paredes” [“Time strolling on walls”] (“E muitos os Caminhos”). The author’s vast erudition and passionate interaction with multiple cultural traditions alone would suffice to guarantee, in her clearly dialogical oeuvre, the presence of characters and places from all times and periods.

After occasional visits to England in the late 1980s, Ana Luísa Amaral lived in the United States between 1991 and 1992. It would be perhaps excessive to attribute to these journeys the dysphoric thematic approach to emigration in the poem “Paraísos,” or the disillusioned outlook of “Uma Constante da Vida” (“Errámos junto / à História” [“We erred next / to History”]), from Às vezes o Paraíso (1998), or to overvalue deictic poems like “Árvores de Rhode Island (3 Poemas)”, from Coisas de Partir (Poemas), published in 1993 after her return from the U.S. However, reading this book, it’s worth considering the role played by the “real” encounter with America in the exploration of analogical networks between science and poetry (the “brain chemistry,” the “robotic panels,” the “cybernetic pathways”), or in the poetization of sight and image technology – no other Portuguese poet of the twentieth or twenty-first centuries has shown us an oeuvre so densely populated with lenses, glasses, screens, beeps, photography, film, television or computers. It’s as if her sojourn in the U.S. had awakened in her a more acute perception of the role of images in the construction of the world we inhabit, as well as a greater consciousness of ethics in poetic writing, partly through a renewal of fossilized representations of this world.

If Coisas de Partir is dominated by an epistemological exercise taken to the extreme, in “gaze gymnastics” which attempt to overcome the limits of the body (e.g. “Perspectivas”), in the books that follow, the poet-dramatist devotes herself to the passionate work of image review, of revisitation of mythical places and characters from personal and cultural imagination, which results in new choreographies and subversive “gaze grammars” – images of images in continuous metamorphosis. The initial reverse poetics give way to an arboreal poetics, of conjectural version, always in a process of re-vision, through the privileged operator of the im-perfect and of the restart: “What if” (or variables: “make believe”, “instead”). Implicit in the poetics of Ana Luísa Amaral is the idea of (near) futility of the physical journey and the apology of the exercising of Imagination, of Memory, and of Attention to the slightest everyday reality. It is not surprising, then, that when the poet boards, alongside hundreds of European writers, the most literary journey of the twentieth century – the Comboio da Literatura 2000 – she sets aside writing the requested logbook, nor is it surprising that she uses the poem “Viagens e Paisagens” as the defining feature of a journey that, to her, has begun before it begins. It is evident in the hybrid text of poetic prose she then created (see Quotations) that, in her writing, the landscape and the places always turn back into Time and Memory: unsettling journeys through undiscovered lands.

In 2000 (or in 2009), Ana Luísa Amaral certainly corroborated the words of Bernardo Soares: “To travel you simply need to exist. In the train of my body or my destiny, I travel from day to day, as from station to station.” (The book of disquiet, trans. Margaret Jull Costa, 1991: 75).

from a different angle:

a small shower of sunlight resolving itself

a mermaid harmonising the universe

Only the wind succumbs

to that excess of light,

and only the wind,

It doesn’t matter where I am,

I don’t need a map

First voice. Of what will you speak in these sheets? Second voice. I do not know. But things don’t revolve around our compass; I know, then, that I will not write a diary, in the strict sense of the term. (…) I will also not write a novel: the very idea of creating a story terrifies me, as does the inherent one of making people talk about their surroundings, or debate states of mind (…) (p.1)

I could make a layout of what I want to say, of what I can’t not say: for example, the unseen things which have supported the course of this journey: the superhuman effort of the photographers, divided in three moments; the film crew that accompanied us. Carrying film cameras, or so many cameras to capture our faces, our gestures, our idiosyncratic deviations, can only be an act of love. (p.2)

Or a look
Always getting lost
Through the river. (p.3)

now without the river and three girls
returning from school. In the hands (still flat),
which the learning of being round,
the circles or the fingers in a caress,
through the times makes wooden frames,
tracing the tow with embroideries.

Schoolwork and inaudible talk from the closed window. I know I haven’t, but it seems to me I’ve been here before. Among one of those three, the theme may be school, my childhood without tow or embroidery (…) (p.4)

June 5th,
12:30 (Alfa Hotel, Lisbon) We haven’t departed yet, but I can start writing, quoting, for example, a poem of mine that starts like this: “The start of the journey: to squeeze this late hour like an orange / eyeless / but with tunnels, memory / comfortable in the landscape / that is always the same, to the varied segments: / you, without further description.” I think I will make this poem an ex libris of the journey. Quoting myself is not, perhaps, the most canonical thing to do, but this is so what I feel, and this poem fits this situation so well! We’ll see. Also, this poem is poetically useful to me, with its idea of a metaphorical train journey. Which is a love poem, although it doesn’t look like it. (…)

Western shall be my gaze
since it was born in the west,
but where does it sprawl next to so much?
The East awaits
so far away — (p. 6).