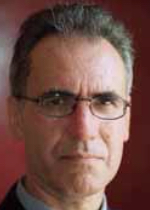 Fernando Venâncio is part of the group of Portuguese intellectuals who exist between the academic world, as university professor and literary critic, and the world of literary creation. This Portuguese writer, in constant “displacement,” was born in Mértola in 1944 and attended primary school in Lisbon, followed by secondary education at the Falperra Seminary in Braga. He studied philosophy in Vila Nova de Ourém and theology in Lisbon.

His first “displacement” abroad began in 1970 when he “escaped” to Holland after being conscribed as a military officer in Guinea, which would be, in his own words, an undesirable adventure with “alguns aspectos de suicídio” (“some aspects of suicide”). He thus moved to Amsterdam, while maintaining contact with Portugal, and graduating in Linguistics at the Dutch capital’s university in 1976. Two years later, he began his academic activity in the Department of Portuguese Studies in Nijmegen. In 1984, he moved to the University of Utrecht, returning in 1988 to the University of Amsterdam, where he received his doctorate in 1995 with the dissertation Estilo e Preconceito. A Língua Literária em Portugal na Época de Castilho (1998). He translated Gerrit Komrij’s poetry collections Uma Migalha na Saia do Universo (1997) and Um Almoço de Negócios em Sintra (1999) from Dutch. He has collaborated as a columnist and literary critic with several publications, most importantly with Jornal de Letras, the magazines Ler and Colóquio/Letras, and the newspaper Expresso.

As a literary critic, his 2001 conflict with Eduardo Prado Coelho and Eduardo Pitta, among others, was controversial, as they parried arguments regarding essayism and literary criticism in exchanges marked by words rarely used in the peaceful Portuguese intelligentsia.

His relationship with the theme of “displacement” in literary creation coincided with the publication of Quem Inventou Marrocos. As an admirer of and frequent visitor to the Maghrebi country, Fernando Venâncio wrote three Moroccan travelogues, in 1988, 2001 and 2002, compiled in this 2004 book, enriching the bibliography of Portuguese travel writing in the Moroccan space. Although it is possible to find continuities with previous writings, namely in what pertains to themes like the picturesque, “a cor local” (“the local colour”), the “evocação do passado português em Marrocos” (“evocation of the Portuguese past in Morocco”) and the “peregrinação às praças portuguesas no norte de África” (“pilgrimage to Portuguese strongholds in the north of Africa”), the truth is that Fernando Venâncio’s work undeniably brings about an innovative take on narrative discourse (Suisse, 2006). The narrator-character of Quem Inventou Marrocos acts alongside previous representations, images he intends to confront with a direct perception; that is, he makes use of the journey to create a symbolic move towards the space of the Other (Leal, 2006).

In Amsterdam, I’m used to seeing the eyes of the Moroccans wonder if I’m not one of them. Besides, I’m proud to think that my ancestors crossed the Strait and made Mértola a worthy town. (Quem inventou Marrocos, 17) (translated)

A strange thing: the persistent Lusitanian imagination, and Oliveira’s film, place it in the desert, although the desert is hundreds of kilometres away. The entire northern half of Morocco is green, much greener than our Alentejo, which is itself quite desert-like. (idem, 39) (translated)

I got a Portuguese day today. Our ancestors went around fortifying the coast of Africa, and built impressive strongholds in Mazagan (now El-Jadida, “the New”) and Azamor. (Idem, 23) (translated)

Ifrane is about fifty kilometres to the south of Fez, but it is a whole other country. It has the highest elevation, of 1650m, and certainly the most modernity in Morocco. Because of its architecture, its elevation and vegetation, and, by the way, its temperature and cleanliness, one might imagine they are in Switzerland. (…) It was in Ifrane that Arab cooperation created an English-speaking university, Al Akhawayn, ‘the Brothers,’ with an excellent reputation. (idem: 48) (translated)