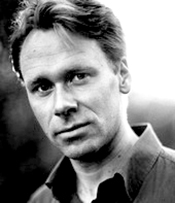 Henrik Nilsson was born in 1971, in Malmö, in the south of Sweden. He published literary reviews in several magazines and newspapers in Sweden, mainly in Sydsvenskan and abroad, including in Telhados de Vidro in Portugal and in some Latin-American magazines. He also participated in the radio show Obs from the Swedish radio station P1. He began his literary activity with the 1993 publication of a volume of experimental poetry. His following work is related to the author’s stays in Portugal, where he stayed for a few years as a student, and in Turkey. In 2006, he published an anthology of Portugal-set short stories, Nätterna, Verónica [The nights, Verónica] and, in 2007, a long poem Om det regnar när du kommer till Istanbul [If it rains when you get to Istanbul]. He also translated Portuguese- and Spanish-speaking authors, such as Fernando Pessoa, Manuel de Freitas, and Francisco Ruíz Udiel.

The short story anthology was published in Portugal in 2010 by Editorial Presença, with the title Um piano em Sesimbra [A piano in Sesimbra], the title of one of the short stories. It was decided that the original title would not be used, since the new one would be more appealing to the Portuguese reader unfamiliar with the author. It comprises seven short stories which are connected, directly or indirectly, with Lisbon, even though one of them essentially takes place in Moura and the other in Sesimbra. The characters are all Portuguese – therefore it is not focused on foreign looks on the Portuguese Other, as is the case of many texts by foreign authors who choose Portugal as a setting for their fiction. Nilsson focuses on daily life situations, on death, love, language, loneliness, and melancholy, the existential questions of one looking for meaning for everyday life. The simple, captivating language invites the reader to read as slowly as the progression of the plot in the stories.

In the first short story, “A última estação” [“The last station”] (11-45), Mário, a writer from Lisbon, was invited for a reading in Beja. However, he fell asleep and only woke up at the end of the line, in Moura, after the last connecting train of the day. By chance, he met a blind person who led him to a meeting of the Associação Mourense para a Narração Noturna (Moura Association for Nocturnal Narration), whose activity was narrating, one night per month, until dawn. The night’s theme was “getting lost”. Mário, living through a lonely time and feeling lost in the torrid Alentejo, finds companionship with the men and women gathered around narratives of getting lost. Reality meets fiction. The reader follows three of the night’s tales, and also the discussion around them.

The second short story is the one which titled the Swedish edition, “As Noites, Verónica” [“The nights, Verónica”] (46-57). Eduardo, who is ill and knows himself to be terminal, continues writing an essay on Bartolomeu Dias, leading him to research, mostly at night, at the Geographical Society. There he met Verónica, the Angolan cleaning lady, with whom he would talk a little every night, often about loneliness, about illness. They were, as Verónica said, “as nossas noites” [“our nights”], those in which two human beings talk, breaking their isolation. In the third story, “Aconselhamento espiritual” [“Spiritual counselling”] (58-70), the narrator focuses on the need people have for support from others. Paula obtains a temporary job answering calls to Professor Nangula, an astrologer, scientist, healer and spiritist, while he is in Angola. Powerless, Paula listens patiently to the confessions and complaints of the clients, until she meets one who simply said she wanted someone to accompany her to a certain place. The fourth story, “Cargueiros” [“Freighters”] (71-81), narrates the wandering of Carlos Monteiro, a freight forwarder nearing bankruptcy. His Lisbon is marked by decadence, by old warehouses. It’s as if his situation takes shape in the cafés, streets, port facilities. His great achievement was going aboard the Turkish freighter Esther, where he was able to steal a small mirror, which he later added to the many others he keeps in a useless old warehouse belonging to his firm.

“Um piano em Sesimbra” [“A piano in Sesimbra”] (82-90) focuses on Mr. Da Costa, a widower who every Saturday journeys to Sesimbra to eat at the same restaurant, from which he hears piano music coming from a window. Then, one day, the music disappeared, increasing the loneliness of the old character. In “O terramoto” [“The earthquake”], the situation is different: Sérgio, who sells television channels on the phone, imagines the 1755 earthquake and, on a day off, visits the areas it affected, passing by “imundos restaurantes […], os escritórios que pareciam agências funerárias, as entradas das pensões com buracos nas escadas” [“filthy restaurants […], the offices that looked like funeral homes, the entrances of pensões with holes in the stairs”] (95). The Lisbon people he observes allow him to have dysphoric visions, leading him to ramble about life: “Somos como pérolas num colar que se soltaram e caíram para o chão, a rolarem cada uma para o seu lado. Não somos livres, somos soltos” [“We are like pearls in a necklace which loosed and fell on the floor, rolling their separate ways. We’re not free, we’re released”] (97). He peoples his reconstitution of the day of the earthquake with the story of Teresa and her lover Luís, both killed in the fateful day. The question posed is “Why?” And, with no answer, he imagines a new earthquake.

The last story is “O silêncio de Adriana” [“Adriana’s silence”] (107-121). Adriana was tired of living in Amadora, a “cidade onde nada acontecia, nunca, farta da bisbilhotice dos vizinhos, desta casa, desta cozinha onde agora estava a lavar os pratos do pequeno-almoço” [“city where nothing ever happens, tired of her prying neighbours, of this house, of this kitchen where she was now washing the dishes from breakfast”] (107). Her husband went off to work; she, on leave, stayed home, in an unfulfilling routine. Just like some of this authors’ other characters, she was searching for her own possible resistance. There were days in which she didn’t speak to anybody. And she thinks about growing old: “O envelhecimento é a forma que o tempo tem de nos tocar” [“Growing old is the way time finds to touch us”] (110). As a reaction to this meaninglessness, she decides to go to Lisbon without doing the dishes: “Amadora que vá para o inferno, pensou enquanto corria pela escada abaixo. António que vá para o inferno, que tudo isto vá para o inferno” [“Amadora can go to hell, she thought while running down the stairs. António can go to hell, all of this can go to hell”] (115). She wanders alone among the crowds, through the silent streets: “O silêncio de Adriana tinha-se tornado o silêncio de todo o mundo” [“Adriana’s silence had become the whole world’s silence”] (120).

These stories are episodes, they do not close themselves, the reader does not know what will happen to the characters who accompanied him for a few moments. Moments in the life of characters not always struck by luck, living lives lacking great horizons, but with great questions, which, however, they do not always pose and if they do, they do so wandering through thoughts without reaching any finish line. The language, simple and pictorial, follows the content, the melancholy, the sadness, but also the smiles, always following the characters’ perspectives very closely.

On the other side of the carriage’s window the dry landscape of Alentejo slid by. He hadn’t travelled through these lands for some time and it was good to see the glistening olive trees, the afternoon light which gave the cork oaks a mild ruddiness, the shortcuts which should be avoided and the isolated hills with their old hermit chapels. Some bee-eaters hovered in the sky with timeless elegance. It was hard to imagine the Atlantic was just a few kilometres away from this torrid landscape, where every tree seemed to be on the verge of catching fire. It was so good to know that, however, all this brown wasn’t far from the blue. (11) (translated)

He payed the driver and stood in the aisle between the seats, since there were no free seats. When the tram shook in its turns he felt like he was aboard a fragile ship exposed to strong gusts of wind. Through a window he glimpsed the Tagus, just like one glimpses an old flame in the crowd before they disappear again. Paula loved to see him like that, like a turquoise ribbon between the walls of two houses so close to each other pigeons barely had the time to spread their wings over them. Just being able to feel its immense presence, especially on hot summer days, when the river flowed through the city like a cooling hand on a feverish forehead. (63) (translated)

Finally, the train stopped at the Rossio Station. Adriana followed the torrent of people which disappeared beyond the carriage doors, down the escalators and into the street. It occurred to her that the light here was more intense, as if spring had come to Lisbon before it came to its outskirts. She wasn’t used to being among so many people, so many buses and so many taxes as she was now in Praça dos Restauradores. The high speed of everything around her seemed to her both stimulating and tiring. After almost bumping into several people, she thought of navigating around them. When she left into the wide sidewalk of Rossio, she felt how good it was that she left behind the suburban air, lacking in oxygen, poisoned by gossip and unspoken disapproval. Everything was suddenly so easy in the spring light. The square, full of hawkers and tourists, teemed with life and movement. (116-7) (translated)