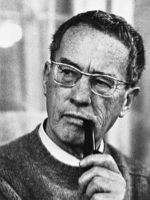 Alfred Andersch was born in Munich in 1914, to a bourgeois family with conservative tendencies. His father joined the NSDAP (National Socialist German Workers’ Party) in 1920; Andersch became a member of the KPD (Communist Party of Germany) in 1930. He was a prisoner in Dachau for some months. He abandoned his political activities, intimidated by the dangerous, persecutory atmosphere surrounding those nonaligned with the regime. He remained in Germany during the National-Socialist period and was forced to participate in the war. He deserted in 1944 and was a prisoner of war in the USA, but was able to return to Germany in 1945. Andersch was part of Group 47, an essentially literary movement in which many members defended the Third Way: neither capitalism, nor communism. In 1958, he left Germany in protest and settled in the Italian canton of Switzerland (later on becoming a citizen of that country, in 1972). Starting in 1952, he wrote many novels and short stories, displaying in them his connection to French existentialism, from which he built his ideas about freedom, a central theme in his work.

In 1934, he began the first of his many journeys: he travelled to Italy, to which he returned a short time later. He also travelled across northern Europe, Ireland, and France, as well as Mexico. Regarding travelling, the author wrote: “In fact one travels out of need, out of curiosity, out of restlessness. Each journey is a critical venture, a form of self-critique, of critiquing the conditions in which we live, of creative disquiet, of the obligation to appear before the world.” (apud Maria Marques de Almeida, 1985, p.129, translated). In 1975, he travelled to Portugal, accompanied by his wife Gisela, a painter, to witness the Carnation Revolution, as many other Germans did at that time (see, for example, Helga M. Novak), and wrote the text ‘Reise in die Revolution’ [Journey to the Revolution], “a very varied set of subjective opinions which sometimes display historical inaccuracies and gaps, inevitable as they were for a foreigner who, during a short trip, attempts to understand a historic process that was still taking place”, as Maria Marques de Almeida points out (Almeida, 1985, p.126). These travel texts are also part of his central theme of freedom. It is not only the characters in the fictional texts that fight for it, but also the traveller, searching for places of freedom that the journey can offer. In this quest, the author developed “a passionate taste for detail in his description of things” (idem, p.127), which creates a very plastic point of view in his descriptions.

All houses in the South of Portugal are white. This is why they are perfect for transmitting messages. Since the Constitutional Assembly elections were coming up, all the houses and garden walls we saw were covered with messages. In a purely visual way, it was surprising and beautiful, should one have a taste for wildly expressive art, for decorative expressionism.  […]

Every time I think of Portugal I think of a man who, walking past windowless houses, goes home, carrying a transparent plastic bag with half a dozen sardines. He will soon roast them, with the door open, through which the light from a clear, windy day comes in. The wind doesn’t bother him. He’s used to it. The wind always blows from the nearby ocean. The ocean brings him wind and sardines. Maybe it could bring more sardines, he may think. To eat until he is truly full – that would be wonderful.

From the walls
hope peels
pale, she covers
the ash
of the extinguished fire.