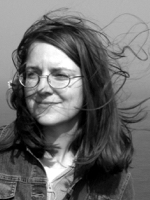 Karin Serres is an author and set designer trained at the École Nationale Supérieure des Arts et Techniques du Théâtre. Besides sets, she has also designed costumes, posters and illustrations for several performances. She has written over forty theatre texts, many of which aimed at young audiences (Un tigre dans le crâne, Colza, La Nuit cranivore, Louise/les ours…), which have been the subject of staged readings or performances often directed by the author herself. She has also expanded her areas of writing through texts written collaboratively by several authors, texts for radio (Chambre froide, Óscar ô mon carosse, Olé Rosita!, La chose dans la poubelle…), for film, children’s stories (Mongol, Lou la brebis…). Between 2003 and 2004 she was associate author at the Théâtre de l’Est parisien, where she developed several writing projects. Currently, in collaboration with the Swedish Cultural Centre and the SACD, she participates in an international project for the development and diffusion of theatre for children and youth.

Her relationship with Portugal began thanks to Patrice Douchet’s Partir en écriture project with the Théâtre de la Tête Noire (Saran, France): six French authors (among which Karin Serres) chose an unknown destination in which to undertake a writing residency. From this experiment arose six dramatic texts presented at the Théâtre de la Tête Noire in 2007. Having chosen Lisbon as her destination, Karin Serres travelled to the Portuguese capital in February 2007, where she began the writing process. In May 2007, she returned to Portugal (Lisbon and Porto) at the invitation of the French Embassy, to participate in a children and youth literature meeting. This second visit was decisive for the conclusion of the play, later titled Marezïa. Set on the Almada pier, next to the Tagus, the play’s action is fragmented, part of a rigorous process of tableau and image montage, aiming to build a vast setting in which around twenty characters exist through the continuous evocation of smells, tastes, sounds, colours, mostly inspired by the aquatic element.

During the 2009/2010 season, the Teatro Municipal de Almada staged Karin Serres’ play, directed by José Martins and with set design by the author herself. The play’s translation, by Alexandra Moreira da Silva, received support from the Fondation Beaumarchais.

The end of the end of the pier. Márcia stands, facing the river, wearing a belted beige raincoat and sunglasses.

MÁRCIA
And I’m waiting like a dog. Licking the water from puddles. I lift my head, a wave bursts against the pier: soaked. I shake myself off, start again with small steps on the untidy pavement, suddenly swallowed by the shadow of a rusty door. Did you believe me? You dreamt.

She taps the cup lightly with the coffee spoon.

MÁRCIA
… rings over the cliff, the boys come back running along the pier, Vasco, with empty hands but his gaze lit by the horizon…

ÁLVARO
The horizon, the drizzle, the sea which hypnotized him…

LUÍS
And I have…

ÁLVARO
The sun’s reflection on the swaying water, the great blows of the surf…

Márcia slaps Vasco. In the wasteland, Luís moves his hand to his face.

MÁRCIA
And what will we have for dinner? Wind?

LUÍS (by the water)
Toads, li’l Márcia, take a look! Caught in a puddle.

Márcia starts to peel a tangerine.