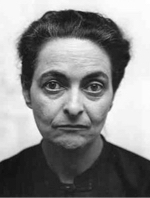 Maria Helena Vieira da Silva’s name will always be associated with the Portuguese diaspora, the penitent path in which Woman and Painter take on an intertwinement and sisterly communion that renders them indivisible. Indeed, the painter does not exist without the woman, or, paraphrasing Heidegger, “o artista é a origem da obra. A obra é a origem do artista. Nenhum é sem o outro” [“the artist is the origin of the work. The work is the origin of the artist. Neither is without the other”].

Maria Helena, as, according to Agustina, she liked to be called, was born in Lisbon on June 13, 1908. The daughter of a diplomat, at age two she set off to Switzerland, not as part of one of her father’s diplomatic missions, but because of the tuberculosis which would cause his early demise.

She returned to a Lisbon still in turmoil after the establishment of the Portuguese Republic in 1911, and took up residence in her maternal grandfather’s house, a staunch Republican. Her early education took place at home, in the world of adults, which brought her, as she later admitted, some moments of distress.

At the age of five she began to draw and by thirteen had turned to oil painting.  Emília S. Braga and Armando Lucena were her first tutors. She later attended a sculpture course at Lisbon’s School of Fine Arts, and an anatomy class at the School of Medicine.

Lisbon became too restrictive for M. Helena’s genius. She left, in 1928, for Paris, with her mother. There, her talent found an adequate environment for its liberation, for the break with the figurative tradition without neglecting, however, the essential praxis of analogy with reality. In that same year she visited Italy, poring over the great masters of art. Upon her return to Paris, still impressed with the lines and shapes of the Italian artists, she attended a sculpture course at La Grande Chaumière and participated, for the first time, in an exhibition. It was there that, during the 1930s, she became part of the New School of Paris generation, following the teachings of Fernand Léger, Henri Waroquier, and Charles Dufreuse, while maintaining some of her independence from the ‘isms’ of an ebullient Europe. Cezanne, Picasso, Duchamp, Braque, Dubuffet, Paul Klee, Mondrian are only some of the names which influenced her.

M. Helena’s fate was set by her connection to abstractionism, putting forth works in which the fragmentation of figurative motifs was clear, in a process of destruction of signifying forms in the quest for the oneiric. I am referring to an art form which, privileging forms and colours, negates themes and figures and banishes commitment to reality.

It was still in Paris that she met Hungarian painter Arpad Szenes, an admirer and supporter of her work who she married in 1930. She travelled with him through Hungary and Transylvania, allowing herself to be as impressed by the landscape as she had been by Sintra, which she would later make a point of showing to her husband.

They settled in Paris in the Villa des Camélias, where they toiled and mingled with intellectuals and artists. In 1933, Maria Helena has her first solo exhibition and, in the following year, sold her first painting to the painter Campigli.

An illness – jaundice – and the wish to help her friend António Pedro, who was preparing his first exhibition, led her to Lisbon for a sojourn at her mother’s house, where she also kept a studio. From this resulted a joint exhibition with Arpad.

She returned to Paris, but the outbreak of World War II returned her to Portugal, apparently outside the conflict. Although she had lost, through marriage, her Portuguese nationality, she thought it to be her safe harbour, especially during wartime. Her country, however, did not live up to her expectations, denying her the return of her nationality and refusing her participation in the Portuguese World Exhibition.

The couple left for Rio de Janeiro (1940). Their adjustment was difficult due to their being unknown in Brazil and their detachment from the mainstream figurative currents. Arpad Szenes began painting portraits and teaching art, while Maria Helena turned to ceramics and tiles. News of the war in Europe caused in her the deep despondency expressed in “O Desastre” (1942). She became friends with Cecília Meireles, Murilo Mendes, and Uruguayan painter Ardenquin, who disseminated her work in Brazil through the magazine Alfar. She showed work in Belo Horizonte and Jeanne Bucher organised her first solo exhibition in New York.

After the war’s end, in 1945, the couple remained for two further years in Brazil before returning to France. M. Helena was now a household name. She sold work, had exhibitions around the world, received awards – she had international recognition.

Having become naturalized French in 1956, and been decorated several times by the French state, she purchased land on the Rue de l’Abbé Carton, where she had a house built to accommodate her studio. There, she continued to paint while also dedicating herself to tapestry and to stained glass: she created eight stained glass windows for the Saint Jacques Church. In Portugal, the Calouste Gulbenkian foundation held a retrospective exhibition of her work.

In 1974 she felt she could look at her country of origin in a different way. She created two posters about the Carnation Revolution, also published by the Calouste Gulbenkian foundation, she showed work and her collaboration became more and more in demand – the Cidade Universitária metro station decoration (1983-1988) was devised by her.

The death of her husband in 1985 disturbed her, motivating the painting “O fim do mundo” (1985). In 1990, the Vieira da Silva-Arpad Szenes foundation was formed in Lisbon. She died on March 6, 1992, in Paris, having just finished painting, presciently, a series of tempera paintings called “Luta com um anjo” [“Wrestling with an angel”] (1992). She left her work scattered across the world, but mostly in France and Portugal.