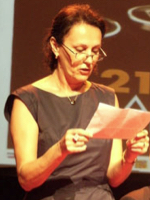 With a reflection on the utopia of revolutions (the Carnation Revolution, May of ’68) as its starting point, Christina Mirjol and Jean-Pierre Sarrazac put forth a journey through the memory of April 1974 (and a clear homage to Zeca Afonso), as well as through the new “esfera do familiar e do popular” [“sphere of the familiar and popular”] in the modern, consumerist, globalized Europe, setting the most banal and ferocious everyday events of the contemporary world and the most absolute dreaminess side by side. The play debuted at Coimbra’s Gil Vicente Theatre in December 2003.

THE MAN WITH THE SHOPPING CART

She’s smart, it’s true, when I’m at the register, I play the customer and she, at the till, adds up the shopping and plays the cashier. We pretend we don’t know each other and I, I really like to play the customer, I have all the time. We met here. It’s true, me and my wife met here. I was a metalworker. But that’s all over. Now I have all the time.