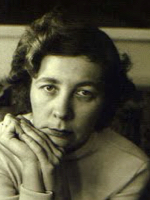 Originating from a family of assimilated German Jews, Ilse Lieblich Losa (I.L) abandoned Nazi Germany in 1934 before her impending deportation to a concentration camp. Although Portugal must have been, as for thousands of refugees at the time, a mere stepping stone towards exile in the United States or South America, she eventually permanently settled in Porto, marrying architect Arménio Losa in 1935 and becoming a Portuguese national.

In her unusual path, she adopted Portuguese as her language for artistic expression, returning to her mother tongue only forty years after her literary debut, when she decided to turn to German and release several of her works originally published in Portuguese. Even without dwelling on the question of whether I.L. is an example of an achieved cultural integration (Becker, 1995: 129), it is important to highlight the intercultural relevance of her work. Besides acting as a mediator for Portuguese literature in Germany, as well as for German literature in Portugal – whether it be through translations into both languages (e.g. Manuel da Fonseca, Alves Redol, Bertolt Brecht, Thomas Mann), or collaborating with periodicals and publishing houses in both countries (e.g. Fischer, Portugália) –, I.L. was also recognised for her work as a writer. Her multifaceted production (novels, short stories, children and adolescent literature, crónicas, essays) earned her a very positive reception from both readers and critics – initially in Portugal, soon after her literary debut in the late 1940s, beginning a mostly biographical and/or historical reading of her work; then in Germany, beginning in the 1990s, when theoretical approaches were already foregrounding the intercultural slant of her writing. She was awarded several honours and prizes, both Portuguese and German (e.g., Grande Prémio Gulbenkian de Literatura para Crianças e Jovens (1982, 1984), a decoration from the Federal Republic of Germany (Ritterkreuz) (1991)). At first ignored in academic circles, her work was reassessed in the past few years in the context of the interest in intercultural studies and Portuguese-German relations. (Relevant to this are Ana Isabel Marques’ master’s and doctoral dissertations (2001, 2009), from which I collected much of the information presented here).

The multiculturalism and culture shocks she experienced from an early age (as an assimilated Jew in the Republic of Weimar, as an au-pair in England, during her persecution in Hitler’s Germany, as a “foreigner” in Portugal) took shape in her fiction, partly marked by characters who, victimised by some process of exclusion, live between cultures, which they observe critically. It is not, then, surprising that I.L.’s narrative work would come to focus on the encounter and confrontation of the subject with the foreign otherness, namely with Salazar’s Portugal. Several of her short stories, anticipations of or variations on themes and motifs developed in her novels, already present aspects of contemporary Portuguese culture in a very critical manner. As for her travel writing (Ida e Volta. À Procura de Babbitt (1960)) and the novels she wrote (O Mundo em que Vivi (1949; trans. 1990), Rio sem Ponte (1952), Sob Céus Estranhos (1962; trans. 1991)), only the fourth and last text is set in Portugal, thematising the encounter and confrontation with the Portuguese reality. I will therefore focus on it.

The novel tells the story of Josef/José Berger, a German Jew who was forced to abandon his homeland because he was the victim of a violent assault by a group of National-Socialists and who, although he was attempting to emigrate to the United States, ended up settling in Porto, where he started a family. Concurrently, we are presented with a picture of Porto society in the late 1930s and during the 1940s, as well as of the life of refugees in the country.

The narrative structure is relatively complex.  A framing device (the story of Berger’s son’s birth) involves a long flashback in which, through four narrative macrosequences and in a play of several timeframes, some of the memories of the protagonist’s German past are recovered, intertwined with the many experiences of his Portuguese fate, among which his meeting and wedding his son’s Portuguese mother.

In a slow and difficult process of integration, never acritical nor totally accepting and always with a feeling of strangeness and the discomfort of difference, Berger comes across several characters throughout the diegesis – first, mostly German refugees, later with Portuguese people as he became closer to the local reality. These crossings in the diegetic universe result in a multiperspective outlook, generally contrasting the two peoples and countries. However, as emphasised by Fröhlich, I.L. does not succeed in breaking stereotypes, giving us a little differentiated image of the two countries and their inhabitants (Fröhlich, 1996: 629ss.). Thus, with regards to Germany, a fundamentally dysphoric image, shared by the Portuguese and the refugees, stands out –anti-Semitism, warmongering – only sporadically punctuated by, for instance, the nostalgia of a lost pastoral setting (by the latter), or by references to the prestige of German knowledge (by the former). The perspective on Portuguese society is more differentiated, but also predominantly dysphoric in representation, made even more negative by the constellation of figures, since I.L. contrasts the image of Porto society, consisting essentially by lower-middle class characters, with that of the refugees, mostly part of an educated bourgeoisie, in a social inconsistency which, visible in both the explicit and allusions, “contribu[i] para enaltecer uma espécie de cosmopolitismo iluminado dos estrangeiros, ao mesmo tempo que torna ainda mais evidente o provincianismo dos habitantes locais” [“contributes towards praising a sort of enlightened cosmopolitanism in the foreigners, while at the same time  rendering the provincialism of the locals even more evident”] (Marques, 2001: 160). It is true that, over the course of his integration process, Berger also comes across some left-wing Porto intellectuals, and comes to recognize certain virtues of the Portuguese (e.g., solicitude, the mild manners). However, the country is on the whole presented as backwards, poor in resources and mentalities, uncultured and narrow-minded – which, additionally, led to some negative criticisms from Portuguese voices.

Perhaps the writer’s proximity to the Portuguese opposition milieu conditioned her focus’ partiality, interested as it was in the lower sociocultural strata. It is also possible that her condition as a refugee contributed to a disillusioned vision, less favourable to a true encounter with the Other. What is certain is that, from her place between two languages and several cultures, I.L. creatively handled her alienation from all of them, producing a story of Portuguese-German cultural dialogue which, despite some shortcomings, has awakened a magnified interest in today’s literary criticism, ever more attentive to questions of interculturality.

But should this same tourist find himself suddenly forced to remain in this strange world in order to make a living, the picturesque becomes his everyday environment, the locals become his neighbours, friends and enemies, and the situation becomes completely different. What seemed to him curious and exotic rises like a thick wall between him and all parts of his life, and for a long time he is nothing but a man apart, an observer always comparing this world to his former one: a walk-on who, never stepping on the scene, remains in the backstage. (Sob Céus Estranhos, 16) (translated)

The Lindomontes’ house was furnished and decorated in the fashion of the German bourgeoisie which had remained unimpressed with the campaigns of “rational art”. There was heavy oak furniture, Persian rugs, flowery crêpe drapes, leather sofas with several cushions strewn about in intentional disarray. (Sob Céus Estranhos, 39) (translated)

The Sousas lived in the narrowest part of the lengthy Rua da Alegria, in a similarly narrow house with azulejos covering the façade, most of them broken. On the ground floor was a grocer’s – behind its little shop window, fat, gluttonous flies feasted upon Flemish cheese and quince preserve in clay bowls. At the door stood two sacks of potatoes, stinky salt cod and dried octopuses. (Sob Céus Estranhos, 49) (translated)