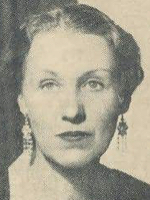 Ann Bridge, the pseudonym of Mary Dolling Sanders, was born in Great Britain. Married to a diplomat, she travelled to China in 1925 and published her first novel Peking Picnic in 1932, based on impressions she collected there. The novel won her the Atlantic Monthly prize in the same year. Over the following years, always drawing from the countries in which she lived with her husband or through which she travelled, she published books relating to not only China, but also Croatia, Italy, Spain (described from France) and Albania.

The Selective Traveller in Portugal, written alongside Susan Lowndes, resulted from a 1947 invitation from Ann Bridge’s editor, at a time when Bridge was already a well-known writer. The editor invited her to write a volume on Portugal unlike regular travel guidebooks and exploring places that were little known. In her reply to the editor, Bridge suggested writing the book in partnership with Lowndes, who had already gathered significant material for a guidebook she was preparing. That summer, Bridge and Lowndes set off on the roads of Portugal, recording their impressions of remote locations. Most of their descriptions are about the natural and artistic heritage they encountered; however, despite their limited knowledge of Portuguese, Bridge and Lowndes attempted to communicate with people from the places they visited, endeavouring to get to know the local customs – for instance, the “fascinante e estranhamente bíblica” [“fascinating and strangely biblical”] agriculture (Bridge and Lowndes: 22). The book, published in 1949, would later become a classic, with several reissues.

After an introduction which provides the historical background of the country and some information regarding geography and flora come some general observations about the customs of the Portuguese people.

In the book, side by side with the descriptions of places (starting from Lisbon and its outskirts, moving on to the South and then heading North, ending with a chapter on Madeira and the Azores) are remarkably detailed impressions (in the case of the artistic heritage they describe), as well as a visible interest in constantly recalling the sensations brought upon the authors by the natural and human landscape.

The Portuguese as a race have many charming characteristics, but none is more delightful or more admirable than their attitude to work, and especially to work in connection with the kindly fruits of the earth. They make a festival, a gay and social occasion, of all the principal operations by which crops are secured to man’s use. Beating the trees and gathering the olives becomes a family picnic — babies sprawl in the shade while laughing youths and elders, gaily clad, collect the precious source of the useful and beloved oil; nothing is prettier, in a really ballet-esque way, than an olive-yard at harvest-time, in the soft December sunshine. (1949:24-5)