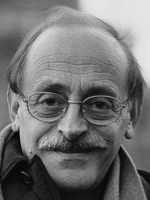 Antonio Tabucchi was born in Pisa, where he graduated in Arts and Philosophy with a scholarship to the Scuola Normale Superiore. His university career began in Bologna. Tabucchi was a professor of Portuguese Language and Literature at the University of Genoa, at the University of Siena, and at the University of Pisa, and was director of the Italian Culture Institute in Lisbon (1985-1987). He translated the works of Fernando Pessoa, Carlos Drummond de Andrade and Alexandre O’Neill into Italian, together with Maria José de Lancastre. For a long time he split his time between Tuscany and Lisbon. At present, Tabucchi constantly traveling, and his stays in Portugal are less frequent and shorter.

His work has been translated into over thirty languages. He was also the recipient of several national and international awards, including the  Premio Luigi RUSSO (1981 – Italy); the Premio Comisso (1985 – Italy); the Prix Médicis Étranger (1987 – France); the Premio Pen Club (1992 – Italy); the Viareggio, Campiello, Palazzo al Bosco and Premiodei Lettori, all of them attributed in Italy in the year of 1994 to the novel Sostiene Pereira; the Prix Européen Jean Monnet (1995 – France); the Prix Européen Aristeion (1997 – Greece); the Österreichischen Staatspreises für Europäische Literatur (1997 – Austria); and the Nossack Akademiepreis (1998 –  Germany). In addition to these, he was also made Chevalier des Arts et des Lettres by the French Republic and Knight of the Order of Prince Henry by the Portuguese Republic. He was also awarded the Josep Maria Llado award for freedom of speech (Catalonia – Spain).

Several of his works have served as inspiration for films, such as Alain Corneau’s Nocturne Indien (1989), Massimo Guglielmi’s Rebus (1992), Fernando Lopes’ O Fio do Horizonte (1993), Robert Faenza’s Sostiene Pereira (1995), and Alain Tanner’s Requiem (1998). His works Il Signor Pirandello è desiderato al telefono and Il tempo stringe, along with other adapted narratives, were performed in Italian, Portuguese and French theatres. A central theme in Tabucchi’s seems to be a search for identity that affects the construction of his characters. In a 1999 interview, Tabucchi stated that “J’ai toujours aimé les personnalités tourmentées et contradictoires. Plus on doute, mieux on se porte. (…) Ils se cherchent eux-mêmes au travers des autres: je pense que c’est la meilleure façon de se trouver soi-même.” (Tabucchi, 1999). This search for the self in Tabucchi’s work is mostly undertaken through journeys, some through familiar spaces, others through unknown surroundings, like in Indian Nocturne. The character is confronted with their own essence when they encounter new situations and characters. It’s also a novel which intends to be challenging and based upon an idea of the writer and the intellectual as a character that is committed to the world: “Je revendique le droit de prendre position à l’occasion. (…) La fonction de l’intellectuel et de l’écrivain est de douter de la perfection.” (ibidem). Or, as he stated in an interview with Carlos Vaz Marques, “(…) a literatura deve ser algo que inquieta e incomoda” [“(…) literature should be something that disquiets and disturbs”] (2009: 46). It was during the 1960s that Tabucchi set his course towards Portugal, a country with which he fell in love after Reading Fernando Pessoa’s “Tabacaria”. Around this time, Tabucchi developed his scholarship on Pessoa and the concepts of heteronymy, saudade, and fiction. As the author reminded us in a 1998 Figaro Magazine: “Recordo-me de um bouquiniste onde comprei uma plaquette em francês com um poema de um autor desconhecido. Comprei-a por duas razões fundamentais: porque o poema tinha um título bizarro e porque o livro era muito barato.” [“I recall a bouquiniste where I bought a pamphlet in French with a poem by an unknown author. I bought it for two main reasons: because the poem had a bizarre title and because the book was very cheap.”] (apud Antonio Tabucchi, Geografia de um Autor Inquieto, 2001).

His intense connection with Portugal echoed through his fiction. In some of his works, the Portugal motif works only diegetically, while in others it works like its own character.  Tabucchi wrote novels, short stories (“The Backwards Game”), fictional biographies (The Last Three Days of Fernando Pessoa), and epistolary novels (It’s Getting Later All the Time); he described dreams or hallucinations (Requiem) in which the Portuguese reality, the typicalness of the Lusitanian space, are often faithfully transcribed. In works inspired by and/or set in Portugal, Tabucchi shows his deep knowledge of the space through a variety of settings (Azores, Lisbon or Porto), or through the presence of important cultural figures (such as Maria João Pires, Amália, Fernando Pessoa), through the portrayals of Portugal throughout history (set in a more or less recent past, such as in The Missing Head of Damasceno Monteiro or Pereira Maintains). Furthermore, there is a non-stereotypical representation of Portuguese people in Tabucchi’s oeuvre; for instance, in Pereira Maintains, two very different characters are presented, Pereira and Monteiro Rossi – in this case, under a dictatorial regime, and taking advantage of this to affirm democratic convictions. Tabucchi’s political and social concerns are emphasized by Manuel Villaverde Cabral, who states that “Precisamente porque Tabucchi ama este país, porventura mais desinteressadamente do que muitos portugueses, é que ele não se pode calar perante as taras da nossa sociedade …. Tanto mais que ele encontra sempre, na nossa paisagem humana, objectos de ternura e admiração” [“Precisely because Tabucchi loves this country, perhaps less selfishly than many of the Portuguese, he cannot remain silent when faced with the peculiarities of our society …. So much so that he always finds, in our human landscape, objects of affection and admiration”] (apud Tabucchi, 2000). Indeed, Tabucchi defended equal rights, freedom of speech, and minorities. Thus, in The Missing Head of Damasco Monteiro, his sympathy towards the Romani is visible in the way he speaks of the character Manolo. Tabucchi’s deep connection to Portugal is also linguistic, which is why he wrote Requiem – A Hallucination directly in Portuguese. He stated in an interview that “Scrivere un testo letterario in una lingua diversa dalla propria è un’esperienza molto importante. È come un battesimo” (apud Gambaro), thus showing his need to create a more intimate relationship through the appropriation of the language, or, in his own words, through a “baptism.” In fact, Tabucchi is a citizen of the world with two great safe havens: Italy and Portugal. “Dall’Italia, Lisbona ci appare all’estremità dell’Europa, viene considerata un punto di arrivo. Ma quando ci si trova lì, ci si rende conto che è una città che invita alla partenza. D’altronde, i portoghesi sono sempre stati delle anime inquiete e dei grandi viaggiatori. Questo spirito vagabondo è un aspetto della cultura portoghese che amo molto e che credo di avere in parte ereditato” (ibidem). Antonio Tabucchi’s oeuvre, due to its countless translations and adaptations into other art forms, has thus carried the image of Portugal and the Portuguese around the world.

Seen from the sea, the first island you come to is a green expanse amidst which fruit gleams like gems, though sometimes what you may be seeing are strange birds with purple plumage. The coastline is impervious, black rock-faces inhabited by marauding sea birds which wail as twilight falls, flapping restlessly with an air of sinister torment. Rains are heavy and the sun pitiless: and because of this climate together with the island’s rich black soil, the trees are extremely tall, the woods luxuriant and flowers abound, great blue and pink flowers, fleshy as fruit, such as I have never seen anywhere else. (The Woman of Porto Pim [2013], trans. Tim Parks, Brooklyn, Archipelago Books)

When sailors stop at Horta it is a custom to leave a drawing with name and date on the wall of the wharf. The wall is a hundred metres long, and drawings of boats, flag colors, numbers and graffiti are all jumbled up one on top of the other. (idem)

Fearing a bloody spectacle, I refused to go at the beginning, but I had to change my mind. It’s not bloody at all, they don’t kill the bull, you know, dear Pessoa. The matador makes a symbolic gesture with his arm after he’s intoxicated the beast with his dance. At that moment, a herd of cows comes into the arena and the bull joins them and they go out. But you should see the elegance of the horsemen dressed in eighteenth-century costume, the horses’ harnesses and the way they prance through their paces around the bull. It was an unforgettable show. (“The Last Three Days of Fernando Pessoa,” in Dreams of Dreams and the Last Three Days of Fernando Pessoa [1999], trans. Nancy J. Peters, San Francisco, City Lights Books, p. 114)

Beneath him, at the foot of the hill, the River Douro glittered in the slanting rays of the sun which was emerging from the hills. Two or three barges were on their way downstream to Oporto. Their sails swollen with wind, they nevertheless appeared motionless on the winding ribbon of the river. Manolo knew they were carrying great casks of wine to the vast wineries of the city, (…) (The Missing Head of Damasceno Monteiro [2005], trans. J. C. Patrick, New York, New Directions)

He had his guidebook with him and decided to explore the city, for example the markets, the working-class parts which he didn’t know. Going down the steep alleyways of the lower town he came across a bustle of activity he had not suspected. Truly Oporto kept up certain traditions which Lisbon had by now lost, such as fishwives, even on a Sunday, carrying baskets of fish on their heads, and then the “calls” of the street trades, which took him back to his childhood: the ocarinas of the knife-grinders, the croaking bugles of the vegetable sellers. He crossed Praça da Alegria, which was as lively as its name implied. (idem)

How different is a city seen in the broad light of day and in blazing sunshine. Firmino cast his mind back to the last time he had seen that city, that misty December day when everything had seemed so dreary and dreadful. But now Oporto wore a gladsome look, lively, animated and the potted flowers on the sills of Rua das Flores were all in bloom. (idem)

Right, said the Taxi Driver, now you have to tell me the way. It’s easy, I said, drive into Largo Camões and where Silva’s the jeweller’s is, take the road going down, it’s called Calçada do Combro, then take Calçada da Estrela and when you reach Largo da Estrela, go up Domingos Sequeiros as far as Campo de Ourique, and then on the left you’ll find Saraiva de Carvalho which will take us straight to Largo do Cemitério dos Prazeres. (Requiem – a Hallucination [2002], trans. Margaret Jull Costa, New York, New Directions, p. 22)

It really was a magnificent night, the moon was full, the air was warm and soft, there was something sensual, magical about it. There were scarcely any cars in the square, the city seemed to have come to a halt, people had obviously stayed longer than usual at the beaches and would return later, Terreiro do Paço was deserted. A ferryboat bound for Cacilhas sounded its siren before leaving, its lights were the only lights you could see on the Tagus, everything else was utterly still, as if caught in a spell. (idem, p. 91)

(…) Africa, which Portugal conquered with arms and ships before bringing it the civilization of Christ, the tongue of the West, and slavery, now returns like a nemesis, it returns with the colorful creole that a woman selling oranges from Oporto has learned perhaps without knowing that Africa is reflected in her (…). (It’s Getting Later All The Time [2006], trans. Alastair McEwen, New York, New Directions, p. 169)

I objected that there were mountains there, too. “Oh, the Serra da Estrela!” he exclaimed. “It’s an imitation of a mountain. In order to get to two thousand meters you have to put up an antenna.” “It’s a maritime country,” I said, “a country of people who leap into the ocean. They’ve given the world urbane, dignified madmen, anti-abolitionists, and poets ill with homesickness.” (“The Backwards Game,” in Letter from Casablanca: Stories by Antonio Tabucchi [1986], trans. Janice M. Thresher, New York, New Directions)