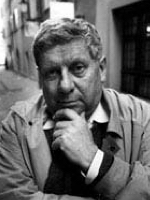 After studying political science, sociology and literature in Zurich and Paris, Hugo Loetscher worked with cultural magazine du and between 1958 and 1962 and with Weltwoche magazine between 1964 and 1969. From an early age he travelled extensively. His work is divided between fiction and travel writing, much of which is focused on Portugal and the Portuguese-speaking world, namely Brazil. After his participation in a documentary on Portugal for Swiss television, titled Ach, Herr Salazar, in 1963, he was banned from entering the country. The documentary was eventually removed from programming and does not figure in the archives, offering a sharp criticism of Portuguese colonial politics. After 1974, he came to the country several times and wrote many articles on Portugal, published on the Neue Zürcher Zeitung newspaper and, since 1988, has spoken at conferences in different faculties of arts and other institutions.

In 1966, he published a translation of the Sermão de Santo António aos Peixes (Die Predigt des Heiligen Antonius an die Fische). Portugal is the setting of some chapters of the novel Der Immune (1975, The Immune One), in which the main character strives for immunization, travelling to many points of the globe, attending the May of 1968 events and also being present during Portugal’s Estado Novo. In the first Portuguese chapter, “Am Rande Europas” (p. 133-136, “On the edge of Europe”), the character is at Cape St. Vincent, connecting his personal history with the Discoveries. The second chapter connected with Portugal is titled “Der gebrochene Blick” (p. 243-247, “The broken glance”) and is set in Lisbon’s São Jorge Castle. While the Immune One gazes upon the city as a tourist, someone comes up to him and points out the headquarters of PIDE/DGS. The character starts to see Lisbon under different eyes – “Lisboa estava por detrás das grades” [“Lisbon was behind bars”] (p. 247). The chapter “Der Abschuß” (p. 367-382, “The shot”) begins with the following sentence: “O Imune levou um tiro, sem que tivesse sido disparado um tiro” [“The Immune One was shot, without a shot being fired”]. The possibility of silencing someone is discussed. The chapter “Ein Robot-Bild des Dichters” (p. 435-441, “A robô-portrait of the poet”) focuses primarily on Fernando Pessoa, whose “Eu – esse é um outro” [“I – he is someone else”] causes much difficulty to authorities when trying to find out who to arrest. This novel is expanded in Die Papiere des Immunen (1986, The Immune One’s Papers), in which the chapter referring to Portugal narrates a Swiss man’s departure on the Santa Maria caravel, sailing off for the Discoveries. In it, saudade is discussed as a kind of “doença suíça” [“Swiss illness”].

On October 5, 2001, his play Die getötete Liebe. Inês und Pedro (Murdered love. Inês and Pedro) premiered at Braga’s Monastery of Tibães, returning to the Inês de Castro theme, one of the most prevalent Portuguese topics in European literatures. Loetscher once again deals with this in his story “Die lederne Gesinnung” (“The leather mentality”, in the book Der Buckel (2002), The hunchback), which revolves around a lawsuit brought against a 15th century “little cobbler” from Ribatejo, who defends the idea that men are not human, but the product of the chaos within Noah’s Ark. The problem lies in the consequences of his theory: “Se os homens não são humanos, então é inútil produzir leis humanas” [“If men aren’t human, then it is useless to create human laws”]. He thus defends total profligacy, licentiousness, and other activities less appreciated by authorities. Loetscher published around twenty articles about Portugal, the first in 1965, “Brief aus Lissabon” (“Letter from Lisbon”), an attempt to understand the Lusitanian soul, including saudade! He “corrected” Reinhold Schneider’s conservative positions in the article “Fatalität der Geschichte. Reinhold Schneider und Portugal” (1985, “History’s fatalism. Reinhold Schneider and Portugal”). In other texts, he leads us through the capital’s museums, the Chiado, the Algarve, the agrarian world of the north and the south, the Azores. These articles constitute a Swiss outlook on Portugal, with its admirations and interrogations.

But there is another Portugal. The one that was before the caravels and discoverers set sail, the one which continued to exist when the interest was on the transatlantic shores and peaceful islands, a Portugal which went on after the loss of the colonial empire: the agrarian Portugal […] When one talks of this agrarian Portugal, it’s customary to distinguish between North and South, between Alentejo and Minho. A dry south, a rainy north. (“Das andere, das agrarische Portugal”, Neue Zürcher Zeitung, 27/28.8.1983) (translated)

The fact that postmodernism raised curiosity and engaged fantasy in Lisbon certainly has to do with the fact that all things modern attract attention. Too long have people lived next to things. With the yearning of the late, we recover all that is modern. But postmodernism isn’t merely a question of a need to recover. It is the Portuguese stylistic feeling, which has always had more to do with the decorative than with finding basic concepts. All this since the Manueline style, developed in the age of Discoveries. (“Europäische Adresse: Lissabon”,Der Tagesanzeiger – Das Magazin, Nr. 29/1994) (translated)

All this discussion around Europe is not new to me or my generation. To us, Europe was the most urgent problem, us who did not want war ever again. In that sense, it is decisive for me that the old paradigm of centre and periphery be overcome. Before, Portugal was distant, on the periphery of Europe; now, they have just served in the presidency of the EU. That is the decisive process of change in thought in a globalized world – on a globe, every point is a centre. (“O escritor Hugo Loetscher defende ingresso da Suíça na EU”, swissinfo, 30.3.2008) (translated)