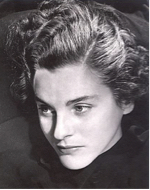 Among her fictional works, novels such as The Company She Seeks (1942), A Charmed Life (1955), and Birds of America (1971) stand out, but her reputation as a writer was established by her autobiography, Memories of a Catholic Girlhood (1957), an account of the author’s Catholic upbringing and her later loss of faith.

Having started her career as a journalist for The Nation and The New Republic (New York), Mary McCarthy soon began to collaborate with The Partisan Review, joining the ranks of the personalities who made PR one of the most influential magazines of the North-American cultural and political milieu. Like many intellectuals of the 1930-60 period (from Edmund Wilson to Alfred Kazin or Hannah Arendt), she coupled her active cultural intervention with an active political intervention. A Trotskyist and anti-Stalinist, Mary McCarthy was one of the most radical women in the American left of her time, defying the roles ascribed to women, and being an example of the women’s emancipation she defended.

Mary McCarthy travelled around the world, writing reports from war zones such as Vietnam, which originated her book Vietnam (1967), published in Portuguese in 1968. The reasons which led Mary McCarthy to Portugal in the winter of 1955 are unknown, but it’s possible it was an official visit, since she came with her husband, diplomat James R. West (connected to the Marshall Plan), and contacted with senior government officials.

Portugal is dissected in two texts: “Letter from Portugal”, sent to The New Yorker (Feb. 1955; reedited in 1962’s On the Contrary) and in the article “Mister Rodriguez of Lisbon”, published in The Harper’s Magazine (Aug. 1955: 65-70), dealing with the “Casas Económicas” issue. Her stay in Portugal also seems to echo through A Charmed Life (1955), in her description of a Portuguese cleaning lady who extolls the superiority of Lusitanian mothers before a U.S. court.

Mary McCarthy travelled around the whole country but it was in Lisbon that she focused her gaze, since it was there she saw the country’s deep contrasts and imbalances concentrated and mirrored. After (recording) her initial impressions of Lisbon’s progress and modernisation, like a “little America,” the signs of poverty and deterioration are described with microscopic detail, deconstructing the surface image. “Letter from Portugal” is an encyclopaedic text, with multiple entries for the Estado Novo: corporatism, the one-party system, the Mocidade Portuguesa, the Casas do Povo, the Caixa de Previdência Social, unions, the types of police forces, media censorship, the criminalisation of communists, refugees and exiles in Portugal, etc.

Drawing from occasional analogies with the Middle Ages (i.e., Alfama “resembles the worst pages of Victor Hugo” in On the Contrary: 115), the author paints the portrait of a surreal country (see Quotations below): the modern highway connecting Lisbon to Estoril and the “herds” of turkeys and their shepherds going to Lisbon from Estoril; the proliferation of taxes, fees and licences (“Cigarette lighters are licensed (…); every donkey toiling up a mountain road”; id: 119), the appliances which go unused, the ban on Coca-Cola and  being barefoot, the obsession with cleanliness and dirt in public places; censorship (cuts to films, such as The Seven Deadly Sins, which was reduced to four deadly sins [id: 124]); the official discourse of negation of poverty (people scrimp and save a lot) and of unemployment (the poor don’t want to work); the gulf between the upper classes and the alienated, miserable populace.

Her superficial comments on Portuguese art serve to prove that no one is truly impartial. On literature, she stated that “[t]he most recent Portuguese literary renaissance was in the nineteenth century” (ibid.). Painting is described as “derivative” and architecture is the object of a long demolishing diatribe: in Portugal, everything copies foreign models (see Quotations below). Even if, in certain aspects, her depiction of a Lilliputian country is pertinent, some of her judgments merely reflect Mary McCarthy’s famous caustic approach and are in contradiction with other statements (Portugal is a “mixture of racial strains” [id: 108]; “The Portuguese are very erratic and confound generalization” [id: 110]).

Mary McCarthy’s more positive words about Portugal are related to its mild weather, its luxuriant vegetation (“a sort of semitropical paradise”; id: 111), and the panoramic views that the hills of Lisbon offer. The azulejo and the maritime motifs of Lisbon sidewalks are also worthy of her praise.

Despite her contact with oppositionists of the regime, she searched in vain for voices that denounced Salazar and the demystification of the oxymoronic idea of a “benevolent dictatorship”; both the Portuguese and foreigners living in Portugal confirm in a unison the vision of the dictator as saint and saviour of the fatherland, as described to Mary McCarthy by a Portuguese-American man on her trip to Lisbon: “The old men went on to relate eagerly (…) how terrible conditions had been Portugal in 1928, when António de Oliveira Salazar, born a poor peasant, left his post in Economics at the University of Coimbra to serve his country (…) saving always, always saving, till the national debt was paid; and how he had sacrificed his personal life to the Estado Novo – never married, lived very simply and austerely, stayed up at night, working, always working”; id: 106-107).

Mary McCarthy’s “Letter from Portugal” is an impressive catalogue of images of a Portugal of which there are still signs, which are deserving of the attention of imagology: it would certainly be worthwhile to compare this black-and-white portrait to the surrealist inside perspective or to the inside/outside perspective of Eduardo Lourenço, in whose writings we can find many similar images to Mary McCarthy’s.

This small country, with its variety of climates and mixtures of racial strains, is an assidous copyist, mimic and borrower. (…). The Miguelite wars were a small-scale version of the Carlist wars in Spain. (…) ‘They can copy anything,’ say the resident foreigners, speaking of the ‘little’ dress-makers, and the shoemakers. (…). This appears to have been true of nearly all the crafts throughout Portuguese history. Even the Manueline architecture, done in the Age of Discoveries and uniquely Portuguese, with its stone ropes and knots and anchors seems not so much a true architectural style as an innocent imitation of real life, too literally conceived. It is only in the far north, in the Minho and the ‘lost’ province of ‘Trás-os-Montes’ (Beyond the Mountains), that you find a pure architecture – the Portuguese baroque, done in granite and severe white plaster, and decorated with gold – that is not like anything else in the world.
This persistent copying of foreign models, this literal translation from one medium to another, produces an effect of monkey humor – a slight absurdity that at its best is charming, like a child’s recitation, and at its worst grotesque. The Portuguese genius, in fact, ranges between the charming and the grotesque (…). Lisbon itself is almost wholly charming – a model city of nearly a million people and an incalculable number of dogs. These multitudinous dogs – in muzzles, as prescribed by law – are forever underfoot (…); they are and must always have been one of the charms and absurdities of Lisbon. (On the Contrary: 108-109)

Lisbon is a planned city. It sprang from the despotic imagination of the Marquis de Pombal, who rebuilt it in the eighteenth century, after the great earthquake. It was planned, I should think, for pleasure and efficient administration, and this is what makes it seem like a toy city. It is full of ingenious contrivances (…). The ferryboats chugging back and forth across the harbor, the little blue train that sets forth, on time, for Estoril (…) all seem part of the toy mechanism; the very fragrance of fresh coffee that drifts like a golden gaze over the city seems to have come from a doll’s electric stove. (idem: 111-112)

Oporto is different. There, gray misery is very evident; the Oporto equivalent of Alfama is a scene of such purulent horror that the tourist flees, with his handkerchief to his nose (…). But Oporto, a dirty, foggy industrial city and the classic hotbed of Portuguese radicalism and rebellion, is under a cloud, both literally and figuratively, and nothing has been beautified by government fiat. (idem: 114-115)

Strangely, it is not the peasants on their donkeys, with their umbrellas, or the white-collar workers in the cafés (…) or the working-class women (…) who look foreign to American eyes; it is the moneyed classes who appear to be of a different breed. (…). The difference between rich and poor is so extreme in Portugal that it seems to have formed a carapace over the rich, making them torpid and incurious. (idem: 126)

The first witness was being sworn: Mrs Mary Viera, a cleaning woman who worked by the day. (…) Her English was surprisingly broken, and she had a voice queerly pitched, like a parrot’s.
Sandy made a soft, groaning sound. ‘She’s changed her testimony,’ he whispered angrily. ‘They all do it – these damned Portuguese. You get them in the court-room, and they get scared.’ (A Charmed Life: 230-231)