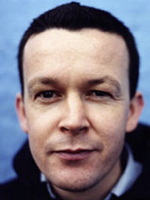 Enda Walsh’s playwright career began at the Dublin Youth Theatre when he was still a university student. However, it would only begin to gain prominence starting in 1994, when he joined the Corcadorca theatre company in Cork, of which he was artistic director between 1996 and 1999. It was there he staged plays like Misterman, The Ginger Ale Boy and Disco Pigs, which earned him the Stewart Parker Trust and George Devine awards. Following these plays came Sucking Dublin, Bedbound and Pondlife Angels; the prestigious Galway Druid theatre company staged The Walworth Farce and The New Electric Ballroom.  In the meantime, The Small Things was produced by London’s Paines Plough in 2005. Portuguese audiences’ first contact with Walsh’s work was in July 2002, thanks to the Almada International Theatre Festival’s hosting of the Schaubühne am Lehniner Platz’s German production of Disco Pigs, directed by Thomas Ostermeier.

Two years later, in September 2004, the playwright visited Portugal for the first time to lead, alongside John Tiffany, a seminar in directing and new play-writing hosted by the Artistas Unidos company, with support from the British Council and in association with Paines Plough, which was attended by many young Portuguese playwrights and directors. The event was recorded in no. 13 of the Artistas Unidos magazine (April 2005), which included an interview with Walsh and Tiffany, as well as Joana Frazão’s Portuguese translation of Disco Pigs (cf. Walsh 2005a: 176-183). Between 2007 and 2008, the same company staged, to great critical praise, two of his plays, Disco Pigs and Bedbound. However, perhaps the most unique experience in the Irish playwright’s experience with Portuguese theatre was the short play Artistas Unidos invited him to write for Conferência de Imprensa e Outras Aldrabices, a performance at the Teatro Nacional D. Maria II in honour of Harold Pinter, in the year the British playwright received the Nobel Prize in Literature, 2005. The play, Lyndie’s Gotta Gun, was later published in the Livrinhos de Teatro collection, being the only edition of the play in any language.

Walsh visited Portugal again in 2007, as part of the “Rising to Meet You” Irish Literature Festival at the Faculty of Arts of the University of Lisbon, between November 14 and 16. In the second day of the event, the playwright spoke with Jorge Silva Melo, the director of Artistas Unidos, in two public sessions: first, at the Faculty of Arts, in a session entitled “A sense of stage,” part of the aforementioned festival; and, later, at the Guilherme Cossoul space, after a performance of Disco Pigs, alongside the play’s director (Franzisca Aarflot)  and translator (Joana Frazão).

LYNNDIE.
I’m nice. I don’t want to torture you but you’re beginning to push buttons, do you understand? Now you can tell me what you know or I can start torturing you. You decide. (“Lynndie’s Gotta Gun” in Plays: One [2011], London, Nick Hern Books)